Wyoming was founded around the Pennsylvania Railroad in 1856. When John T. Jakes, an agent for the Delaware Railroad and for the Express Company, arrived in Wyoming to take charge of the offices, there was only a mill and two houses. Soon after Mr. Jakes arrival, a store was built to serve the people trading at the mill and shipping on the railroad. Mr. Jakes remained active in the community for many years, later playing an important role in bringing a Post Office to Wyoming. Following its establishment, he served as the first Postmaster in 1866 and continued in that capacity until 1885.

Mr. Jakes was also influential is constructing a church within the town in 1865, originally the Methodist Episcopal Plank Church of West Camden. He went on to serve on the board of trustees upon its completion. His contribution to the early development of Wyoming and the surrounding area was substantial. Much of his family continued to live and work in the community, his daughter graduating from Wyoming Institute and then teaching at the school until it was closed in 1887.

By 1860 Wyoming had grown into a small village and was variously called “Camden Station” or “West Camden.” In 1865 the Reverend John J. Pierce, of the Wyoming Valley in Pennsylvania, came to “West Camden” and laid it out in building lots. Reverend Pierce was pastor of the Methodist Episcopal Church of West Camden for a short period after its construction and dedication in 1865. In this same year, it was decided by the citizens of “West Camden” to change the name of their village to Wyoming out of deference to the Reverend Pierce.

The town experienced a boom in population in the following years, attracting a number of people from Reverend Pierce’s former home in Wyoming Valley. People from the surrounding areas just south of the town, the North Murderkill Hundred, and slightly northwest, the West Dover Hundred, also contributed to the population increase seen during this period. On March 20, 1869, Wyoming was incorporated as a town by the Delaware General Assembly. Population growth continued in the following years.

By 1886 the school house built in 1870 had become too small for the number of children attending from the town and surrounding area. Only 30 years after the town was founded, a larger two-story building was constructed, and the number of children attending was estimated at 125. The growth in business was substantial as well, as the town had attracted a variety of important establishments in those three decades. By 1888 the community was said to include three general stores, a drug store, a butcher, two blacksmiths, two coal dealers, a shoe shop, two doctors, and a variety of other establishments that reflect the rapid growth of the town.

Beginning in the 1860s, peach and apple crops had become considerably important economically in the Delaware region. The main point of shipment for this region was Wyoming. Wyoming was regarded as the “Peach Center” of Delaware, the Peach State. Several growers could be found in the area at the time, as well as multiple business operations within the community to evaporate their juices and can the peaches. Still today, Fifer Orchards ships its seasonal produce around the world. The town celebrates the traditional importance of peaches to the area each year during the annual Peach Festival, held the first Saturday in August. 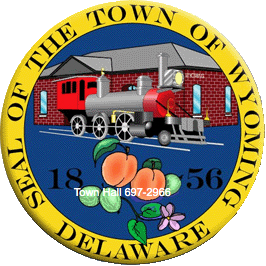